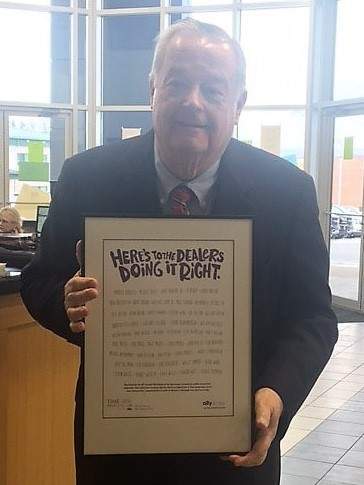 John Miller has been nominated as a Time Dealer of the Year!

The TIME Dealer of the Year program honors new-car dealers in America who exhibit exceptional performance in their dealerships and perform distinguished community service. Dealers are nominated by members of the ATAE (Automotive Trade Association Executives) and the winner is acknowledged at the annual NADA show.

Check out the Punt - Pass - Kick event the Miller Auto Group sponsored at Jefferson High School where one lucky contestant was given the opportunity to win a new vehicle. He first had to punt the ball from the 1 yard line. Wherever the ball landed from the punt was where he had to start to then throw a pass as far as he could. Finally, wherever the pass landed was where he had to kick a field goal from. This was no easy task, but what a great effort! We look forward to participating in such a fun event again next year!